The Discovery Ranch Program can make a difference in your son’s life. We know we can make a difference. We have done the research. Our research centers around a patented testing tool called the Youth-Outcome Questionnaire (Y-OQ). The Y-OQ is a powerful tool that lets us track teen’s problem behaviors. With the Y-OQ, we can target behaviors that need to change, and also measure improvement.

The Y-OQ looks at six different kinds of behaviors found in troubled teens and places them on a scale. This is a vital step in helping your son. When you measure problem behaviors, you can approach them in a targeted way. When you see improvements in your son’s Y-OQ score, you can be confident that his behavior is improving.

To explain in detail, the six different behaviors measured by the Y-OQ are:

Somatic (S): The S scale measures perceived physical wellness. Examples of this type of problem would be headaches, dizziness, and pain or weakness in joints.

Interpersonal Relations (IR): The IR scale represents relationships with other people. A teen’s level of aggression, defiance, and ability to make and maintain friendships are aspects of IR.

Social Problems (SP): The SP scale measures tendency to break social rules. This could be exemplified by behaviors like destruction of property, substance abuse, and inappropriate sexual behavior.

Critical Items (CI): This scale attempts to identify behaviors that may need immediate intervention beyond standard outpatient treatment, such as day treatment or residential care. Behaviors that may require immediate intervention include obsessive-compulsive behaviors, suicidal thoughts or behaviors, and eating disorders. In the event that your son receives a high score in any part of CI, he may need immediate help.

Higher scores on the Y-OQ represent higher levels of dysfunction. Lower Y-OQ scores mean that teens are better able to lead happy, productive lives. As your son’s behavior improves, you can expect to see his Y-OQ score become lower. In order for the Y-OQ to be meaningful to you, you need to be confident that the Y-OQ will measure your son’s progress objectively. That is why a third party conducts our Y-OQ assessments.

The graph below compares the average Y-OQ score to Discovery Ranch graduates to the average score of students at admission, adolescents undergoing other forms of treatment, and the general population. 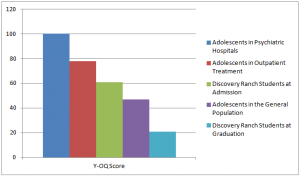