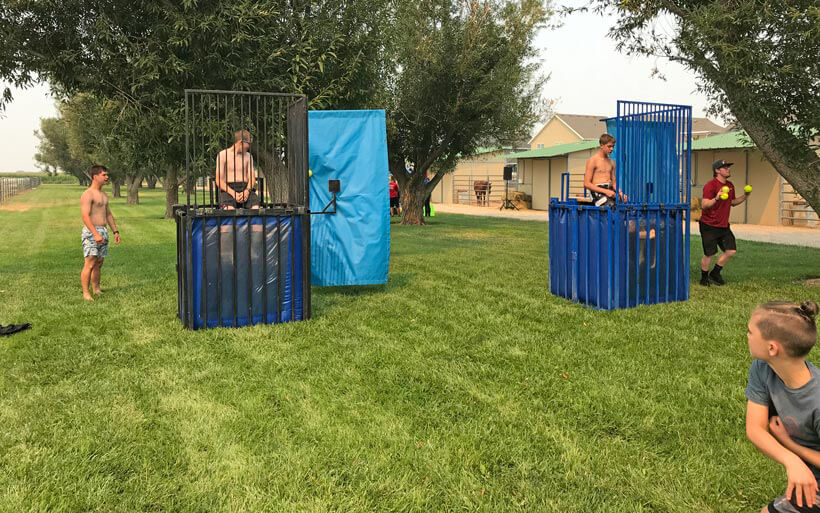 As I write this, everything beneath my chest is soaked through with water. I have a dunk tank, a yellow tennis ball, and a young man with a wicked throwing arm to thank for that. Discovery Ranch for Boys just concluded its August 2018 Fun Friday. It lived up to its name.

I arrived at the section of the ranch called the West 40. The West 40 is a large stretch of lawn shaded by willow trees and flanked on one side with horse stables and on the other with cattle pens. A few dozen boys ambled around on the grass. Most of them wore swim trunks and t-shirts. Staff members and their families mingled with the boys on the dry grass. Two blue dunking booths sat out on the grass, and they were drawing most of the attention. Boys lined up to toss the balls at the dunk tank and to be dunked. 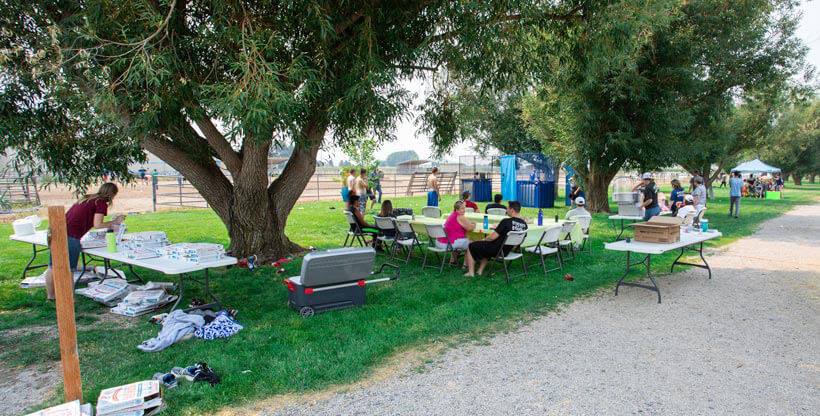 There was also a cotton candy machine off to one side and a popcorn machine. In the distance, three women beneath a white canopy painted faces on the boys. Near the cattle pens, another group of boys played volleyball. It looked like a school carnival, except it was on a more intimate scale than any school carnival that I had ever seen. 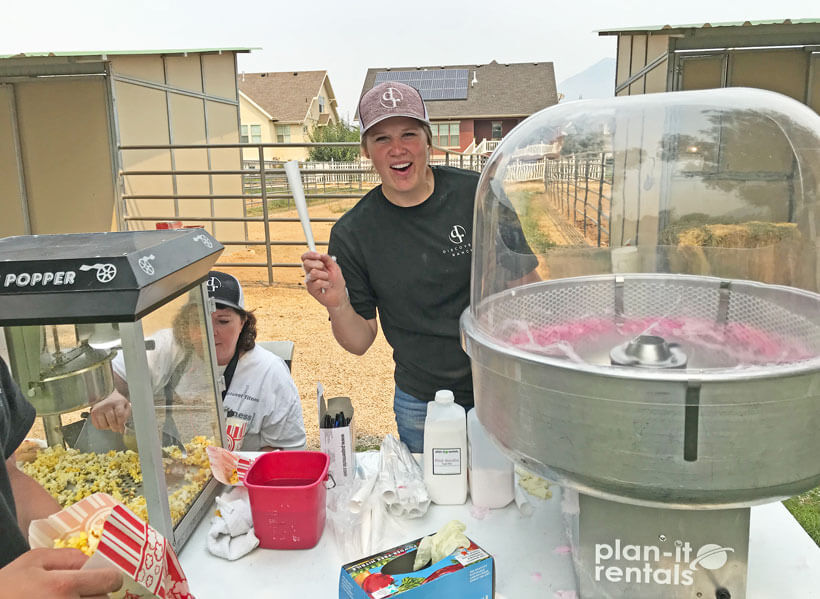 Dan, the calf program manager, helped to plan the event. He greeted me warmly when I arrived, then teasingly invited me to take a turn in the dunk tank. I handed him my cell phone and headed for the tank.

A young man in a bright orange t-shirt has already claimed his position at the top of the diving board. Dan told him to get down. At first, the boy looked confused. I explain that I was cutting in. A big, playful grin spread across the young man’s face.

“Oh, that’s okay,” he answered. He graciously climbed down.

I clumsily pulled myself up the narrow blue ladder on the back of the tank. I scooted to the edge of the diving board, and the boys lined up to throw balls at the little target that extended from a metal arm of the dunk tank.

The first boy threw three balls. They all missed. I think he was being a gentleman. The next young man landed the perfect shot on the first throw, and I slid down into the water. I shuddered with cold. The chattering of my teeth nearly drowned out the cheers.

Heavy with water, I hefted myself up the interior ladder, wiggled onto the diving board, and stumbled wetly down the ladder at the back. After that, I squished over to the back tables, because I had earned my slice of pizza.

Pizza is a rare treat for the boys at the ranch. Junk food is limited. They only get treats like pizza, pie, and soda pop on special occasions, like Parent Days and Fun Fridays.

I enjoyed my two slices of pizza and Strawberry Fanta with relish. Then I moved to the back where a trio of women painted boys’ faces. A cluster of boys surrounded them. 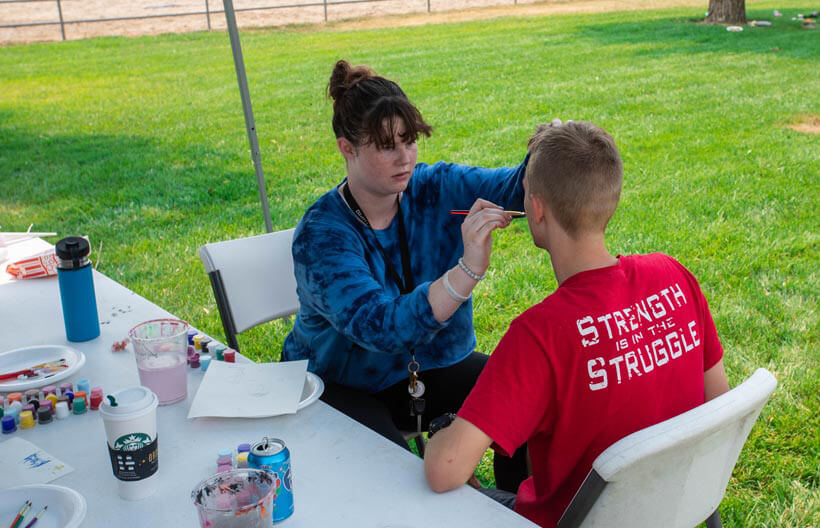 The ladies under the canopy were the art teacher, Denise Brown, her daughter, and artistically gifted member of the staff. I saw a young man whose face with black painted-on glasses and a yellow lightning bolt on his forehead.

“Are you a Harry Potter fan?” I asked.

I smiled. “Why the face paint?” I asked.

“I just saw it on the page and–” He shrugged.

He looked great. I told him so.

Then I interrupted Denise while she was painting a tribal symbol on a young man’s shoulder. “How did you come to be involved in face painting?” I asked.

“I have been an artist all my life,” she answered breezily. She said that she did not have any specific training as a face painter, but her work looked so impeccable that I would never have known that.

When I asked if she was enjoying herself, she smiled answered that she loved spending time with the boys.

Megan, a recreational therapist and  ropes co-ordinator, ran a strict pie-eating contest. About a dozen boys sat at the yellow table. A whipped cream covered mini-pie sat in front of each boy. Megan reviewed the rules. Do not begin eating until Megan tells people to go. If you want to win, then you can’t have anything more than crumbs on your plate. No using your hands. She meant it too.

When one of the boys licked whipped cream off the top of the pie before Megan had given the word to start, Megan added more. There was a lot at stake. The prize given to the first and second place winners was a regular-sized pie.

“He just did the same thing!” another boy declared. He nudged the young man beside him. Megan added more whipped cream to his pie too.

“I need more! I did it too,” a third boy confessed.

“He’s lying, he just wants more,” another argued. Megan added more whipped cream to the third boys’ pie too. Then they are finally ready to start.

The young men put their heads down and ate the pies. Some ate languidly, waiting for the contest to end so that they could pick up their pies and eat it with their hands. Others are excited about the possibility of getting a big pie. They ate with gusto.

Megan declared the winners. It was almost anticlimactic but in the best possible way. Neither the loser nor the winners are discontent. Everyone seems relaxed. Good food, warm weather, and fun can do that to a person.

Before I left, Dan reminded me, “At the end of the day, they are teenage boys and teenage boys need to have fun.” The staff at Discovery Ranch for Boys remember that. That’s why the young men have opportunities to play while they learn and heal.

People who work at the ranch never lose sight of their purpose, which is to help families heal. Events like Fun Friday help achieve that purpose. The young men have a chance to relax, and the fun that people share help staff and students to build stronger relationships.

Typing in my airconditioned office in my slowly drying black jeans, I reflect on the happy faces of the young men and the staff. It’s almost enough to keep me warm. Almost.