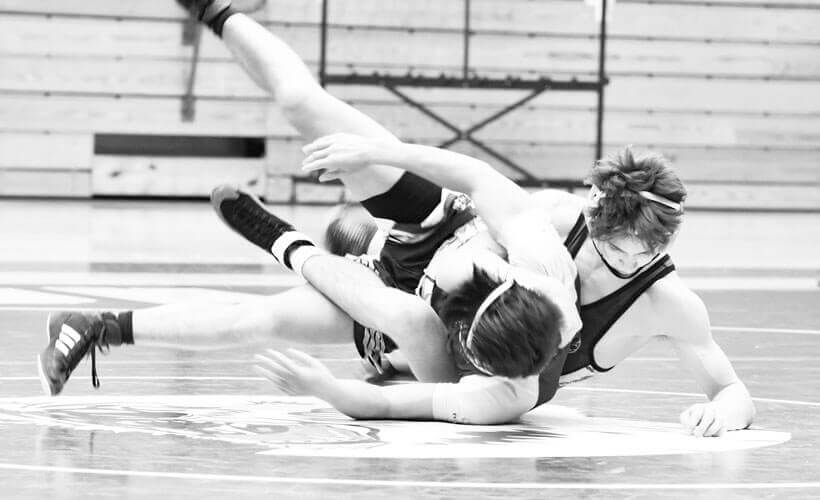 As a school for troubled youths, most of the students have already confronted their share of critics before they walk through the doors of Discovery Ranch for Boys (DRB). Many of our students’ worst critics are themselves. Their past experiences and failures make them hesitant to try difficult or new things. That defeatist attitude is one of the things that DRB seeks to change. The belief that it is better to try one’s best, and keep trying win or lose, is part of the foundation of who we are.


The attitude was recently on display when one of our organization’s founders Steve Petersen demonstrated some hands-on leadership by helping out with Discovery Ranch for Boys Physical Education class. Mr. Petersen, who most people at Discovery Ranch know simply as Cub, gave a week of his time to teach wrestling to the boys.


Cub happens to be an experienced wrestler. He trained in wrestling during high school and college and has coached wrestling for many years. He currently also coaches the Maple Mountain High school wrestling team. Cub taught the boys the fundamentals of wrestling, and of life.


Boys from each of the three houses at Discovery Ranch had thirty-minute lessons with Cub for one week. At the end of the week, Cub divided the boys into weight classes or brackets. Each separate bracket competed for first, second, and third place.

According to Cub, wrestling is a unique sport because it parallels real life. That is why he was eager to spend his time helping the boys learn about wrestling.


“When you are wrestling, you are there by yourself when you are competing you win it on your own, or you lose on your own,” Cub said. If you aren’t happy about the outcome of your match it’s up to you to do something about it.  In time they all start to make the connection between working hard at something and success.


At the beginning of the week, some of the boys were skeptical about wrestling. They did not take the sport seriously. However, the attitude skepticism was gradually replaced with a competitive spirit as the boys were paired with opponents.

“Cub was good with them,” said recreational therapist Tessa Olsen. “A lot of the boys gained confidence in themselves.”

According to Cub, he did not intentionally focus on sportsmanship. However, with Cub’s example, the boys demonstrated the attitude and integrity on their own.

The boys took the attitude to heart during their each of their matches. “The sportsmanship these boys displayed impressed me more than anything. None of the boys complained when they lost,” said Cub. “They helped each other up off the mat and congratulated each other. They were just really good sports. That was impressive.”

After the tournament ended, and all of the prizes had been given out, many of the boys asked when they could participate in wrestling again. As a result of their experiences, their eager attitude was a total contrast to the attitude they had at the beginning of the week. In addition to boys who won prizes, every boy who participated received a laminated quote. The quote contains the words of Theodore Roosevelt. The words demonstrate what Cub hopes the young men learned.

It is not the critic who counts; not the man who points out how the strong man stumbles, or where the doer of deeds could have done them better. The credit belongs to the man who is actually in the arena, whose face is marred by dust and sweat and blood; who strives valiantly; who errs, who comes short again and again, because there is no effort without error and shortcoming; but who does actually strive to do the deeds… who at the best knows in the end the triumph of high achievement, and who at the worst, if he fails, at least fails while daring greatly, so that his place shall never be with those cold and timid souls who neither know victory nor defeat.

DRB works hard to provide role models like Cub. The boys have the opportunity to see that success does not come from never having failed, but from what they choose to do after a defeat. Experiences like the wrestling match help boys to build resiliency. They also learn how to silence critics, whether the critics are other people or with themselves. As a result, they learn as much about the sport as they do about real life.